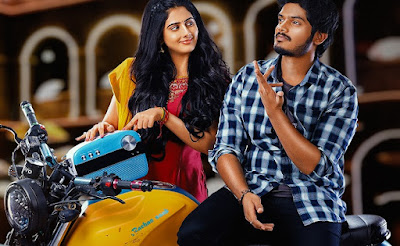 Tollywood Actor Akash Puri is one youngster  in Telugu Film Industry, Son of Tollywood Director Puri Jaganaddh Now He came with action entertainer in the form of Chor Baazar, Gehna Sippy is the heroine to the film, written and directed by B Jeevan Reddy. VS Raju and Alluri Suresh Vaarma produced the FIlm under IV Productions

Suresh Bobbili given Music to the Film.
Chor Bazaar Release Trailer
Movie is released with zero Expectations. Akash looks in a Mass Avatar.a boy belonging to Hyderabad’s old city, went into an issue around a missing diamond from a museum. Gehna Sippy is Mute Girl.

Our Telugu Actor Archana Plays a key role in the movie along with Sunil.

Subbaraju, Sunil, Archana, Sampoornesh babu acted well in the Movie..
Plot:  Chor Bazaar tells the story of a gangster named Bachhan Pandey (Akash Puri), who works as a jewel thief and meets a mute girl along the way. His life takes an unexpected turn when he is forced to steal a diamond.
Movie Starts with Character Introduction and in the Middle Interval bang is Highlight to the Movie.  This film begins with a tense and suspenseful tale of a hero and heroine’s love, but the action quickly turns to a hero and heroine’s romantic relationship.
Second Half of the Movie is More exciting. its all about how he faces consequences after thefting Diamonds and wether love is succeeded.

Actress Samantha Ruth Prabhu’s Yashoda is out in the theatres. The makers left no stone unturned to promote the film

Actress Samantha Ruth Prabhu’s Yashoda is out in the theatres. The makers left no stone unturned to promote the film